Harmful algal blooms negatively impact water quality in hypereutrophic systems that are common in aquaculture. However, few algaecides are approved for use in food-fish aquaculture. This study assessed the effectiveness of seven products, including hydrogen peroxide (as a concentrated liquid or in granular form (PAK-27)), peracetic acid (as VigorOx SP-15 and Peraclean), copper (as copper sulfate in unchelated (powder) or chelated (Captain) forms), and a clay-based product (as Phoslock) on phytoplankton (including cyanobacteria) and zooplankton biomass. Each product was tested in a 14-day laboratory and 35- day field experiment to assess their short- and long-term performance. Although some products (i.e., copper-based and liquid hydrogen peroxide) quickly reduced phytoplankton, effects were short-lived given that chlorophyll concentrations returned to starting concentrations within 21 days. In contrast, all but one product (i.e., concentrated liquid hydrogen peroxide) maintained low phycocyanin concentrations for 35 days. Zooplankton biomass trends showed large, negative effects for most algaecides; however, zooplankton rebounded for most treatments except for copper-based products. In general, copper-based products remain the most efficient and cheapest choice to reduce total phytoplankton biomass in aquaculture systems. However, peracetic acid-based products effectively and quickly reduced cyanobacteria while having marginal effects on beneficial algae and zooplankton. Such algaecides could be effective alternatives to copper-based products for aquaculture farmers.   Hydrogen peroxide . Peracetic acid . Copper . Clay . Harmful algal blooms . Chemical control 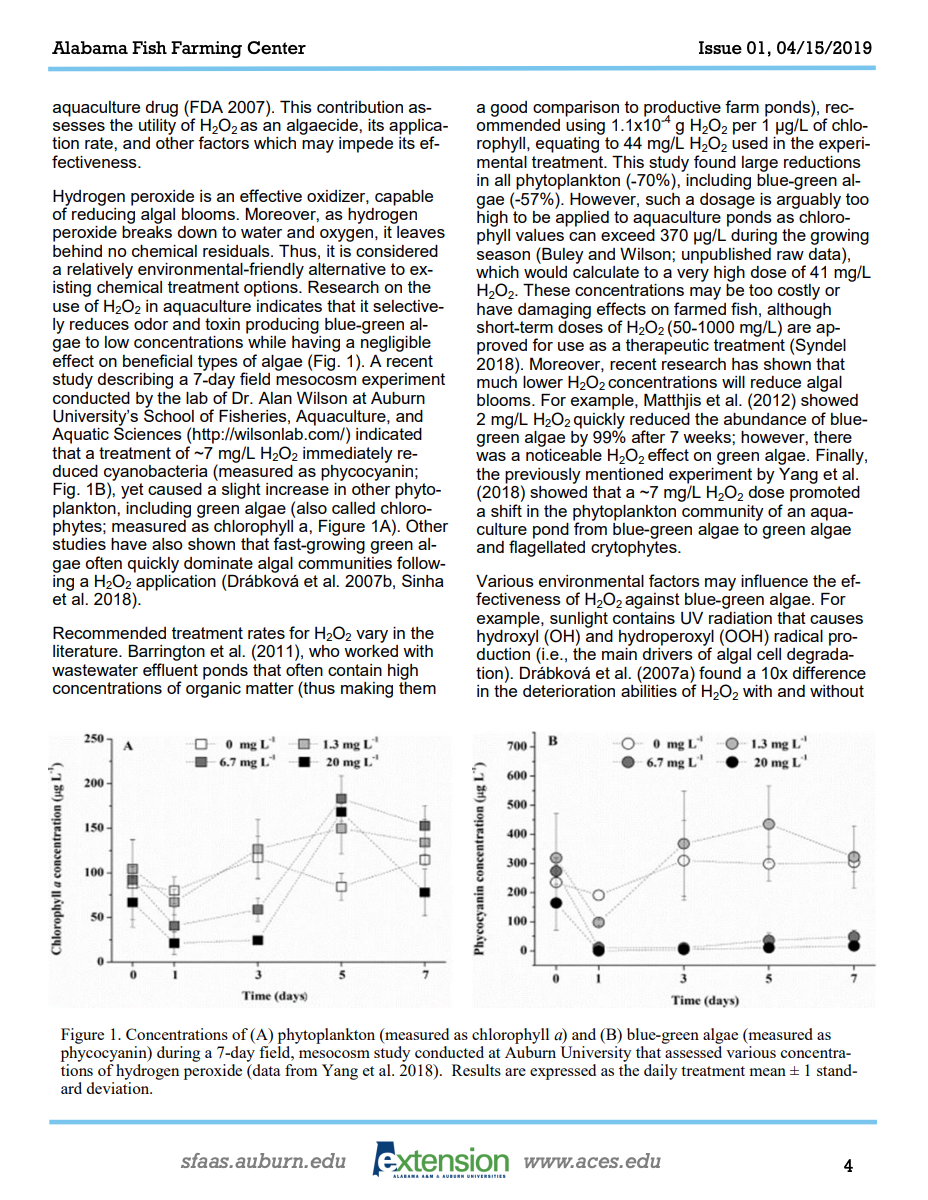 Excessive blue-green algae (i.e., cyanobacteria) can harm aquatic organisms, including farmed fish. Although algal populations may be beneficial as they acquire excess nutrients, including potentially toxic forms such as nitrite and ammonia, and produce oxygen through photosynthesis, large algal blooms may lead to anoxia as decaying cells are decomposed by bacteria. In addition, some select strains of blue-green algae may produce chemicals that harm fish health (e.g., microcystins, nodularins) or cause fish filets to taste muddy (i.e., geosmin, 2- methylisoborneol). Both situations can cause significant economic losses to fish farmers around the world.

As our understanding of nuisance algal blooms continues to grow, so too do the means to combat these events. Developed methods can often be placed into the groupings of chemical, biological, and physical controls. Of these, chemical controls have been used to great effect; however, there is concern that some approved algaecides may persist in the environment for extended periods of time and, in certain situations, are too broad-spectrum in their toxicity to be practical. Consequently, alternative chemicals are actively being researched. And, although many algaecides exist, hydrogen peroxide (H2O2) has proved quite effective at reducing blue-green algae (Kay et al. 1982), and is currently an approved FDA

aquaculture drug (FDA 2007). This contribution assesses the utility of H2O2 as an algaecide, its application rate, and other factors which may impede its effectiveness. 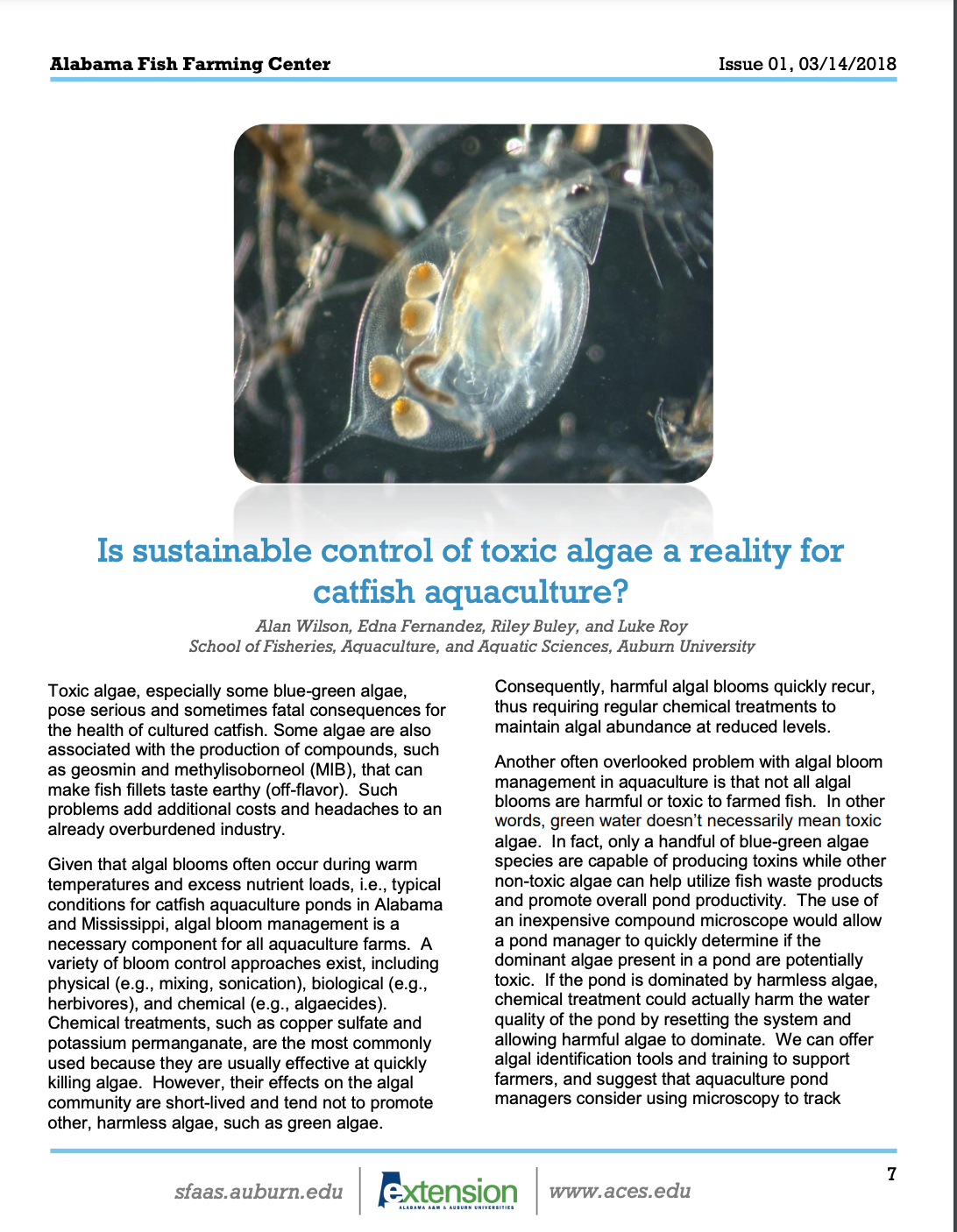 Toxic algae, especially some blue-green algae, pose serious and sometimes fatal consequences for the health of cultured catfish. Some algae are also associated with the production of compounds, such as geosmin and methylisoborneol (MIB), that can make fish fillets taste earthy (off-flavor). Such problems add additional costs and headaches to an already overburdened industry.

Given that algal blooms often occur during warm temperatures and excess nutrient loads, i.e., typical conditions for catfish aquaculture ponds in Alabama and Mississippi, algal bloom management is a necessary component for all aquaculture farms. A variety of bloom control approaches exist, including physical (e.g., mixing, sonication), biological (e.g., herbivores), and chemical (e.g., algaecides). Chemical treatments, such as copper sulfate and potassium permanganate, are the most commonly used because they are usually effective at quickly killing algae. However, their effects on the algal community are short-lived and tend not to promote other, harmless algae, such as green algae.