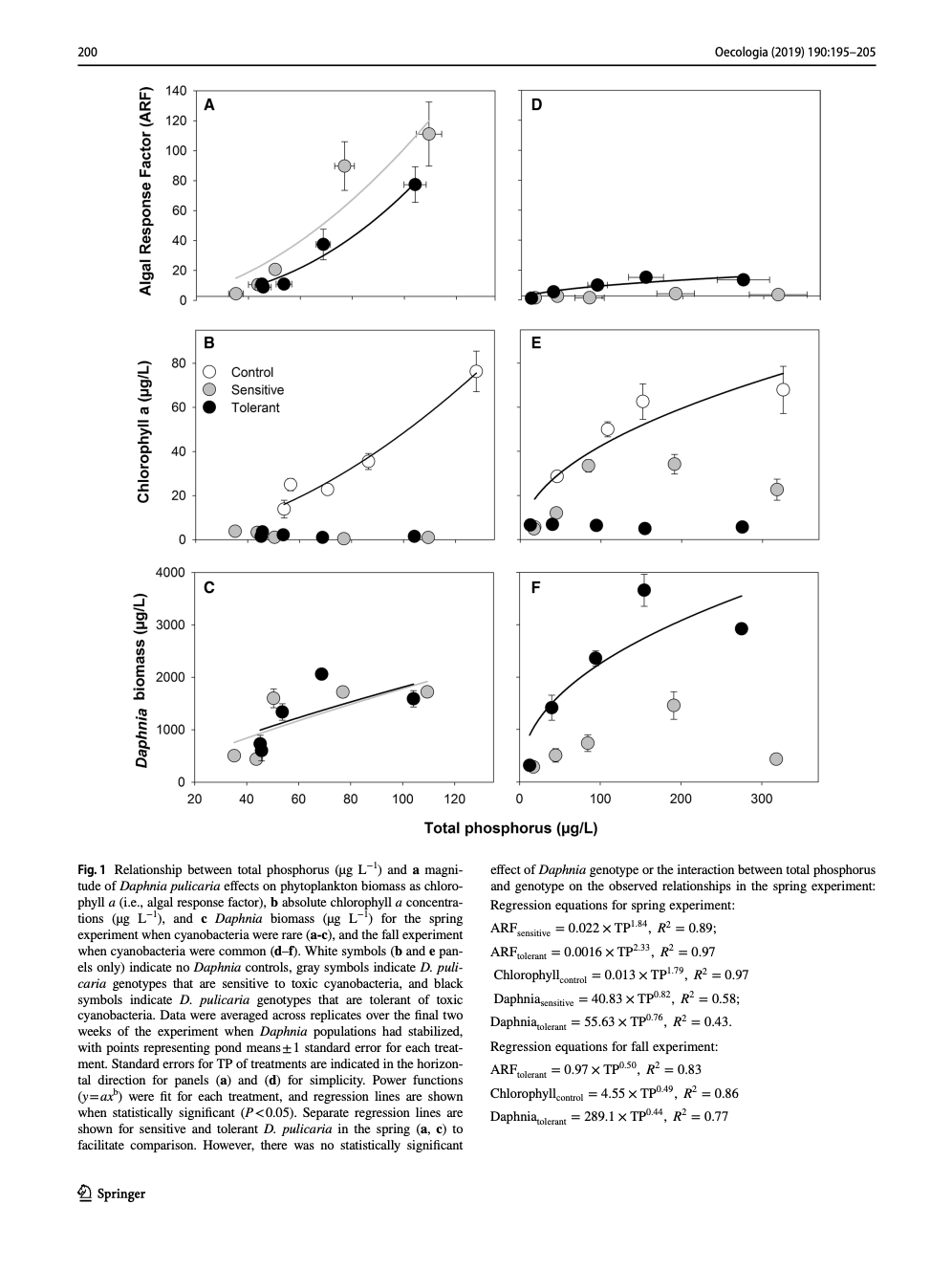 Humans have artificially enhanced the productivity of terrestrial and aquatic ecosystems on a global scale by increasing nutrient loading. While the consequences of eutrophication are well known (e.g., harmful algal blooms and toxic cyanobacteria), most studies tend to examine short-term responses relative to the time scales of heritable adaptive change. Thus, the potential role of adaptation by organisms in stabilizing the response of ecological systems to such perturbations is largely unknown. We tested the hypothesis that adaptation by a generalist consumer (Daphnia pulicaria) to toxic prey (cyanobacteria) mediates the response of plankton communities to nutrient enrichment. Overall, the strength of Daphnia’s top–down effect on primary producer biomass increased with productivity. However, these effects were contingent on prey traits (e.g., rare vs. common toxic cyanobacteria) and consumer genotype (i.e., tolerant vs sensitive to toxic cyanobacteria). Tolerant Daphnia strongly suppressed toxic cyanobacteria in nutrient-rich ponds, but sensitive Daphnia did not. In contrast, both tolerant and sensitive Daphnia genotypes had comparable effects on producer biomass when toxic cyanobacteria were absent. Our results demonstrate that organismal adaptation is critical for understanding and predicting ecosystem-level consequences of anthropogenic environmental perturbations.

Grass carp, Ctenopharyngodon idella, (Cuvier and Valenciennes, 1844) are an effective biological control for many aquatic plants, especially submersed macrophytes and macrophytic algae. Despite limited data, grass carp are sometimes promoted as a tool for controlling filamentous algae, including some cyanobacteria, in small impoundments. One important cyanobacterium, Lyngbya wollei (Farlow ex Gomont) comb, nov., is a nuisance species in North America that forms benthic mats and surface scums and can produce multiple intracellular toxins and off-flavor compounds. Current management of Lyngbya calls for approaches similar to those for other nuisance algae, including chemical control using herbicides and biological control using grass carp when herbicides are not practical. Although agency biologists and private consultants recommend stocking grass carp to control filamentous algae, no conclusive empirical data show that grass carp consume Lyngbya. We conducted mesocosm experiments where different densities of grass carp of varying sizes were fed diets either containing a macrophyte, variable watermilfoil (Myriophyllum heterophyllum Michx.) and/or Lyngbya. In general, grass carp did not consume Lyngbya when offered by itself pr with milfoil, regardless of carp density or size. To test one mechanism mediating the lack of Lyngbya consumption by grass carp (i.e., chemical ecology), a feeding experiment where ground Lyngbya was fed to grass carp in agar pellets suggests that the secondary chemistry of Lyngbya prevents grass carp consumption. Although anecdotal observation suggests that high rates of grass carp stocking appear to Control Lyngbya, the results of this study suggest that the mechanism of control is not direct consumption (e.g., physical disruption of the benthic mats). 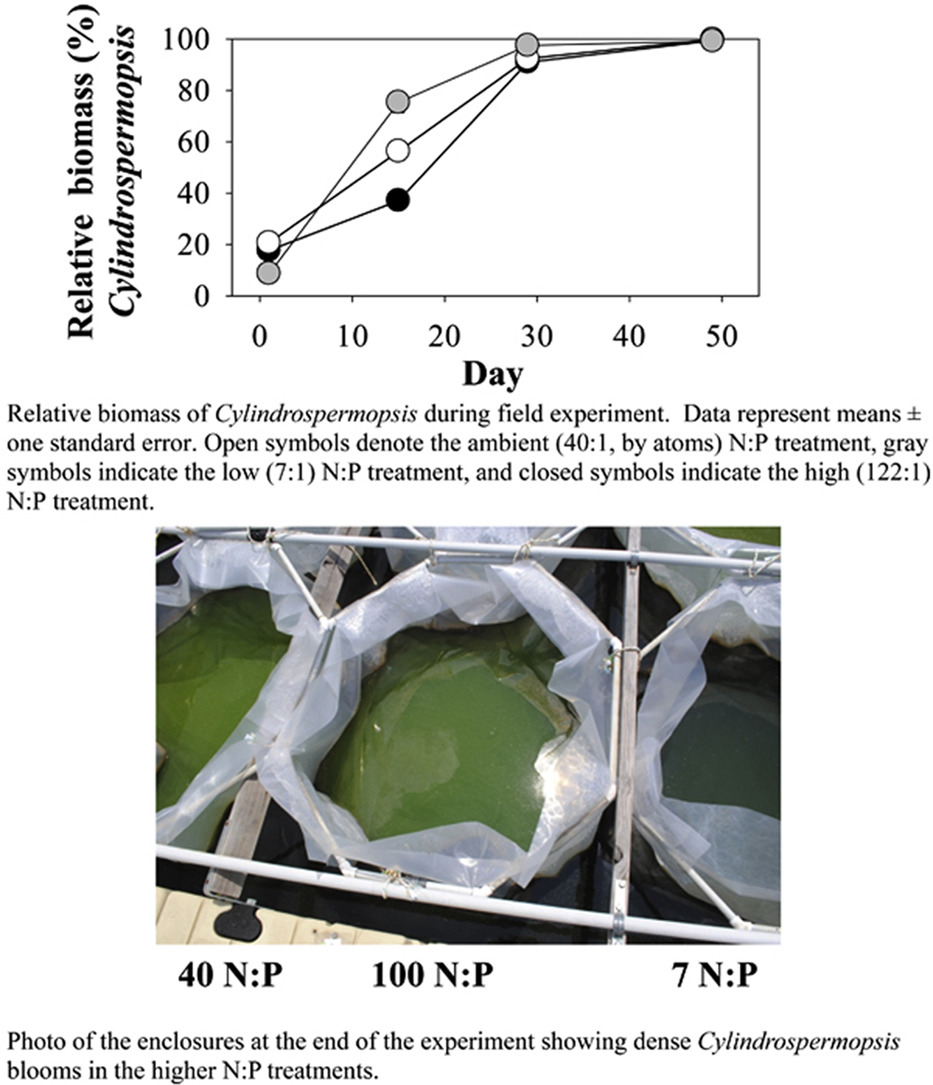 In freshwater ecosystems, a variety of factors mediate phytoplankton community structure, including herbivore community structure, light availability, temperature, mixing, and absolute and relative nutrient concentrations (total nitrogen (TN), total phosphorus (TP)). Ecological stoichiometry examines how the nutrient content of organisms and their environment may mediate population-, community-, and ecosystem-level processes. The manipulation of N:P ratios is a widely regarded tool for managing phytoplankton species composition given that nitrogen-fixing cyanobacteria should dominate algal communities under relatively low N:P (<64:1, by atoms) given their ability to convert dissolved dinitrogen gas into organic nitrogen. However, due to the physiological expense of nitrogen fixation, diazotrophs should be outcompeted by non-nitrogen fixing phytoplankton under higher N:P when other environmental factors are similar. We tested this hypothesis in a field experiment using 2500-L limnocorrals installed in a eutrophic lake (ambient N:P ∼40:1 (by atoms); TN ∼1360 μg L−1; TP ∼75 μg L−1). At the start of the experiment, we randomly assigned limnocorrals among the ambient (40:1) and low (7:1) or high (122:1) N:P treatments (n = 4 replicates/treatment), which were established by adding P or N at the start of the experiment, respectively. The phytoplankton community in the enclosures at the start of the experiment was diverse (i.e., 18 phytoplankton genera) and dominated by chlorophytes (including Coelastrum and Scenedesmus (30% and 13% of total biomass, respectively)) and cyanobacteria (including Anabaena and Cylindrospermopsis (23% and 17% of total biomass, respectively)). In contrast to predictions based on ecological stoichiometry, the phytoplankton community in all N:P treatments increased in abundance and was almost entirely composed of the nitrogen-fixing cyanobacterium, Cylindrospermopsis raciborskii, by the conclusion of the study. Moreover, concentrations of the cyanobacterial neurotoxin, saxitoxin, were enhanced under the two highest N:P conditions. The ability of C. raciborskii to dominate phytoplankton communities under such extreme N:P shows that short-term management of nutrient stoichiometry through fertilization is not likely to be effective for controlling blooms of this noxious cyanobacterium and may help to explain the rapid expansion of this invasive species to temperate latitudes.